Department of IT & Computer Science

About Department of IT & CS

“We impart skills to empower you, experiential learning to give you confidence, and international exposure that offers you recognition”

Department of IT and Computer Science at PAF-IAST is the largest academic department. We offer admissions in four undergraduate programs namely: Computer Science, Software Engineering, Artificial Intelligence, and Data Science, and one graduate program i.e., Data Science. Degree programs are designed with concept of international exposure that can equip the students to high-tech customized systems. Our Austria-trained (Fachhochschule certified), Ph.D. faculty in diverse computing fields is committed to prepare students for national and international service by raising their skills to secure the required placements around the globe. 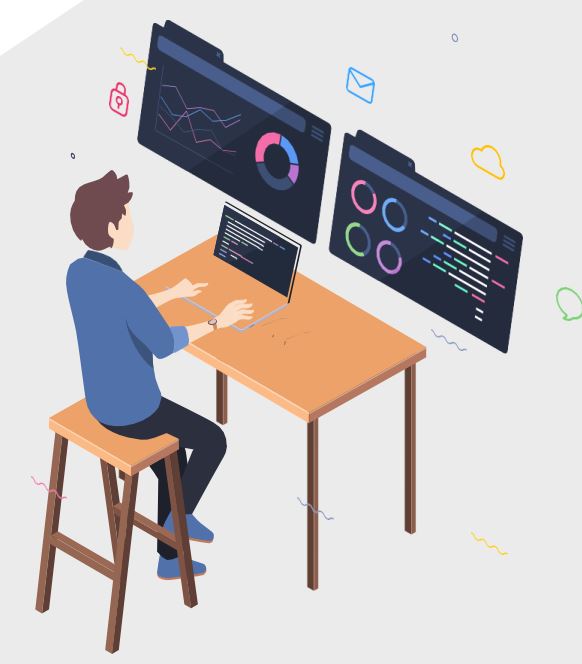 We facilitate our students to engage them interactively with the professors of international repute. All our undergraduate degree programs have extensive 500 Hours mandatory internship programs with leading partner industries nationally and internationally. Internship exposure will help the students to attain industry-relevant skills and will serve an apprenticeship with future employers. State of the art labs and smart classrooms with blended learning facility offers a unique learning opportunity to our students. Department has academic collaboration with Austrian and Chinese partner universities, which helps the student in getting international exposure and recognition. The department has close academic collaboration with Department of Applied Computer Science, FH Joanneum University of Applied Sciences, Austria. Selected students from different academic programs might have the opportunity to study their final year at FH Joanneum. Moreover, our students will be encouraged to take courses taught by foreign faculty from international partner universities.

We are more of an entrepreneurial school. Our aim is to involve students in applied projects and encourage students to be successful entrepreneurs. We facilitate students with industrial support, start-up incubation, trainings and workshops, kitty funds, infrastructural support, and transforming the mindset.

We are proud to offer exciting and challenging degree programs in undergraduate and master degree.

Undergraduate degree programs offered by the department are as under:

> Bachelor of Science in Software Engineering

> Bachelor of Science in Computer Science

> Bachelor of Science in Artificial Intelligence

> Bachelor of Science in Data Science

Master degree program offered by the department is as under:

> Master of Science in Data Science

Department of IT and Computer Science has following salient feature which makes it stand out:

State of the art labs

State of the art curriculum with emphasis on practical skills

The department provides a variety of facilities to students, faculty, and researchers to work in an innovation-friendly environment.

Our labs stand out in terms of the latest in hardware and software technology, thus engendering an environment conducive to the promotion of teamwork, interactive learning, and professional education of very high standards. Our instructional and experiment facilities induce students to undertake projects in lucrative industry-oriented technologies like Software Engineering, Big Data, Cloud, Machine Learning, Artificial Intelligence, Data Ware Housing and Mining, Networking, and application-oriented software.

There are several computing labs in the Department that are available for student use. Some of these well-equipped and specialized laboratories are:

This Lab is named after Dennis MacAlistair Ritchie (September 9, 1941 – c. October 12, 2011), an American computer scientist. He is credited with the creation of the C programming language while developing UNIX operating system and B programming with his longtime colleague Ken Thompson.

Denis Ritchie Lab is known for its good range of computer programming facilities. Linked with highspeed Internet (Ethernet and Wi-Fi Both), this lab comprises Corei5/i7 All-in-One networked Desktop Computers running Windows as well as Linux operating systems. The additional lab features include state-of-the-art smart boards and Programming Display Units (PDUs) for 360 views of the instructor’s screen. With its ergonomically set layout, it is
furnished with modern custom-built furniture. It is ideally suited to conduct students’ workshops and software competitions. Its equipment inventory comprises:

This lab commemorates an English mathematician and writer Augusta Ada Lovelace, the first-ever Software Developer (10 December 1815 – 27 November 1852). She is chiefly known for her work on Charles Babbage’s proposed mechanical general-purpose computer, the Analytical Engine. She has been celebrated as the world’s first computer programmer, being the maiden developer of the world’s first software for an early computing machine.

This lab is named as such in recognition of revolutionary contributions made by Alan Mathison Turing, a British mathematician, and logician (23 June 1912 – 7 June 1954), in the fields of mathematics, cryptanalysis, logic, philosophy, and mathematical biology, as well as the subsequent new areas like computer science, cognitive science, artificial intelligence, and artificial life.

Alan Turing Lab is a state-of-the-art- facility for students studying databases, Artificial Intelligence, and Operating Systems. Equipped with high-speed Internet (Ethernet and Wi-Fi Both) and computing nodes, it comprises VIRTUAL DESKTOP INTERFACE (VDI): thin-client machines, networked machines running Windows as well as Linux operating systems. The lab is fitted with Smart Boards and Programming Display Units (PDUs) for 360 views of the instructor’s screen. It is ergonomically laid out with appropriate modern furniture. The lab has the provisions to conduct students’ workshops and software competitions. Its main equipment inventory comprises:

Arfa Abdul Karim Randhawa (2 February 1995 – 14 January 2012), a Pakistani computer prodigy surprised the world by becoming the youngest Microsoft Certified Professional (MCP) in 2004. Her Achievement is recorded in the Guinness Book of World Records. This lab commemorates her world fame in the realm of computational sciences. Arfa Karim Lab is a state-of-the-art lab where students can work with ease, peace, and full concentration. Ergonomically designed, the lab prides itself on its all-in-one PCs (Corei5/i7) and comfortable focused seating area for laptop users. Students have ready access to high-speed Internet (Ethernet and Wi-Fi Both) and computing nodes. The lab is equipped with:

The SKYNET Lab has ample state-of-the-art networking equipment to prepare students to cope with the current and future demands of the IT industry besides affording them adequate hands-on networking experience with real equipment. Housed in a 30 x 42 square feet area, the lab is managed by the Department of IT & CS.

This lab is named after Muḥammad ibn Mūsā alKhwārizmī (780-850), Arabized as al-Khwarizmi, (formerly Latinized as Algorithmi). Al-Khwarizmi was a Persian polymath who is credited with producing vastly influential works in mathematics, astronomy, and geography. He also developed the concept of the algorithm in mathematics which brought him fame as the grandfather of computer science. The lab is a tribute to his pioneering contributions in the
the domain of computational sciences.
Al-Khwarizmi Lab is mainly dedicated to the Final Year Projects and research activities. It also caters to general-purpose computer usage. It is a great resource for students needing high-speed Internet
(Ethernet and Wi-Fi both) and computing nodes. It features VDI machines for computational processes, state-of-the-art Smart Boards, and Programming Display Units (PDUs) for 360 views of the instructor’s screen. It is furnished with high-quality furniture in an ergonomically built setting. The Lab is also a venue for students’ workshops and software competitions. Its equipment inventory comprises:

Department of Computer Science and Information Technology (CS&IT) at Pak Austria Fachhochschule: Institute of Applied Sciences and Technology (PAF-IAST) provides industrial exposure to it students right from the beginning of their professional education, towards the institute’s vision of “Skilling Pakistan”.

Students of CS&IT department practice their knowledge, learnt during course work, in an industrial environment to further boost their skills and gain a valuable professional experience. Every year during summer break, internship placements are arranged for every student of the department for a minimum period of six weeks in an experienced and professional industrial partner. During internship, students are encouraged and supported to explore their interests and IT market to better equip themselves with the skills they need to be industry-ready after graduation.

Department of IT & CS equips students with skills that are high in demand from the emerging IT Industry. Students will learn how to develop professional & innovative software systems, gaming applications or become an expert web developer.