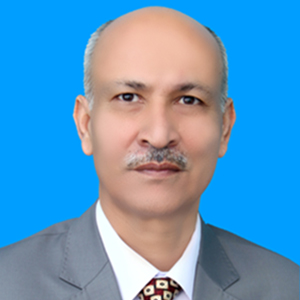 Born and brought-up in Karak, a small town of Khyber Pakhtunkhwa, Dr Fida Khattak did his MSc in Physics from Quaid-e-Azam University Islamabad. In 1986, he joined the Higher Education Department (HED) of Khyber Pakhtunkhwa (then NWFP) as Lecturer in Physics. He went to London in 1988 and joined Imperial College London as a Post-Graduate student. After the completion of his PhD in Laser Plasma Physics, he returned to Pakistan and resumed his duties in HED as Lecturer in Physics. In 1992, Dr Khattak joined the Ghulam Ishaq Khan Institute of Engineering Sciences and Technology in Pakistan as an Advisor (Academic) and stayed there till 2001, working on different academic and administrative positions. In 2001, he joined the Queens University Belfast (UK) as a Research Fellow and remained part of a largescale experimental campaign using various high power laser facilities, both in UK and Europe. In 2007, Dr Khattak started serving the Kohat University of Science and Technology as Professor of Physics and he remained there till his superannuation on 28th February 2021. In October 2021, Prof Khattak joined the Pak-Austria Fachhochschule: Institute of Applied Sciences and Technology, Pakistan. In all, he has more than 35 years of academic/research experience.

Professor Khattak has expertise in laser plasma physics and has recently started applying artificial intelligence/machine learning techniques to solving physical problems. He has more than 40 publications to his credit with impact factor greater than 130. He is the recipient of Higher Education Commission of Pakistan Beat-Teacher award, and Izaz-Fazeelat and Tamgha-e-Imtiaz awarded by the Govt of Pakistan. He is an elected Fellow of the Institute of Physics (UK) and senior member of IEEE. He is a life member of the Pakistan Physical Society. He remained the Dean of Sciences at the Kohat University for about 12 years. Dr Khattak has
more than 35 years of teaching and research experience in national and international organizations.